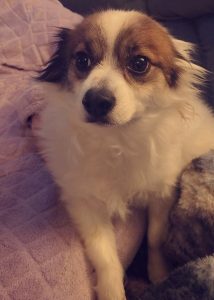 Following is Bandit’s story, one of the pets we were able to assist with our Critical Care Companion Animal Fund, a non-profit that our team raises money for which helps families that are taking good care of their pets (they are vaccinated and neutered/spayed) but just cannot make ends meet for emergency care.

Bandit, a 4 ½ yr. old Chihuahua mix, came to us in October 2020 with bloody stools, nausea, and just not feeling like himself. He had a seizure the day before, so his family was worried that things were ramping up to be big trouble.

Bloody diarrhea can be a symptom of many different disease processes. It was our job that night to decide what was going on in his tummy so we could fix it and get him back to his family. Physical exam revealed a sweet little dog who was getting dehydrated and whose belly was very painful. No foreign bodies or intestinal obstructions were palpated and a test to tell us if he had pancreatitis (a common cause of abdominal pain) was negative, but he needed fluids to replace what he was losing rapidly from his hind end. The concern of sepsis (when the blood barrier in the GI gets leaky and bacteria from the GI can make their way into the blood stream to wreak havoc on the rest of the patient) was great with all the blood in his stool.

Bandit’s family was very concerned that they could not keep him hydrated at home, as he wouldn’t get up to drink and he didn’t want to eat at all, but they also couldn’t afford the ICU care with IV fluids through the night. Even the fluids to go under the skin, special meds to help his nausea, antibiotics to help prevent sepsis, and the meds to protect his gut and restore the GI/Blood barrier were going to strain their budget, as they had some strains placed on it already with things going on in their family.

We discussed all levels of care for Bandit, the costs for all levels, and the prognosis to be expected with each level of care. We worked out a plan they could ALMOST afford, and which would take good care of Bandit, but with extra work on their part at home. To make it work though, we had to apply for Critical Care funds to make it the rest of the way.

Bandit’s family learned how to give fluids under his skin to keep him hydrated, how to dissolve medicine in a syringe to administer regularly to coat his tummy, how to mix up an oral solution that would provide needed proteins and energy in a manner that would not tax his system or make him nauseous and took home a special diet that would be easy on his stressed GI system. They got packets of the GOOD bacteria to feed him so he could repopulate his gut, and antibiotics to give for a few days to make sure the BAD bacteria would not take over again.

They administered these meds over the weekend, with a few check-ins with Dr. Amy. Thanks to their stable nursing and the Critical Care Fund to help them purchase the remainder of the care needed, Bandit pulled through wonderfully!

Incidentally, Bandit had been able to take advantage of another of our special programs, the Spay/Neuter Voucher Program, several years before. We are so blessed to be able to keep the bond alive for Bandit and his young family.

Accessibility by WAH
Call Us Text Us